The Islamic Arts Museum Malaysia is one of Kuala Lumpur’s most popular attractions, and well-regarded as Southeast Asia’s largest museum of Islamic art. Housing extensive collections of Islamic decorative arts from all over the world, this stunning building is located at the fringe of the 227-acre Lake Gardens and is accessible within a five-minute walk from the National Planetarium and National Mosque. 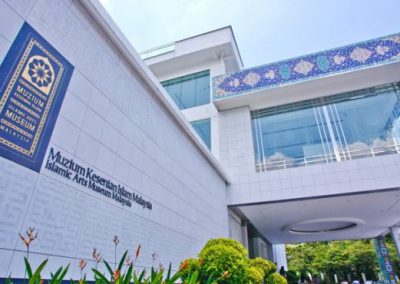 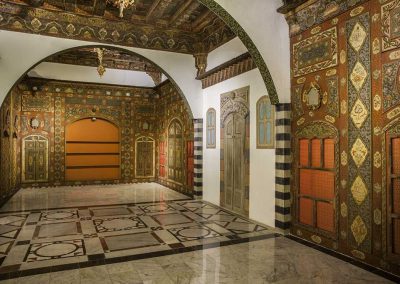 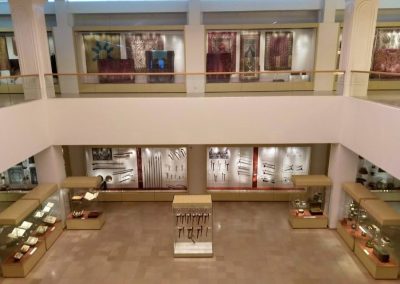 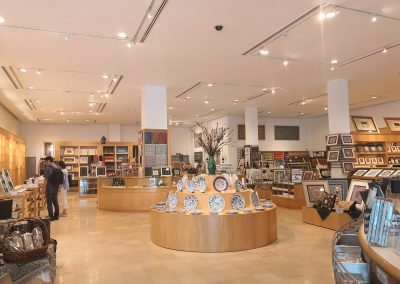 Since the beginning of its establishment, KL Bird Park has been a renowned eco-tourism destination situated right in the heart of Kuala Lumpur. Located in the serene and scenic Kuala Lumpur Lake Gardens, it is only 10 minutes’ drive away from the city centre of Kuala Lumpur. It is home to more than 3,000 local and foreign birds of approximately 200 different species.

Sprawling approximately 20.9 acres of verdant valley terrain, the park is divided into 4 zones; Zone 1 and 2 make up the free-flight zone; Zone 3 is the Hornbill Park and Zone 4 is where the birds are placed in separate cages and mini aviaries.

One of KL Bird Park’s most extraordinary feature is that in Zone 1, 2 and 3, birds are let free in the aviary which closely resembles their natural habitat. With this free-flight concept, birds are able to breed naturally in this unique environment.

Visitors will have an exciting experience of watching colourful and melodic birds perching and winging about freely while relaxing in a natural and beautifully landscaped surrounding. KL Bird Park is also wheelchair-friendly and is reputed to be the largest free-flight walk-in aviary in the world. 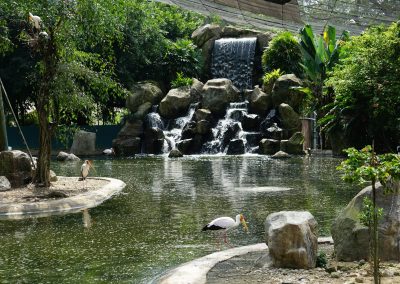 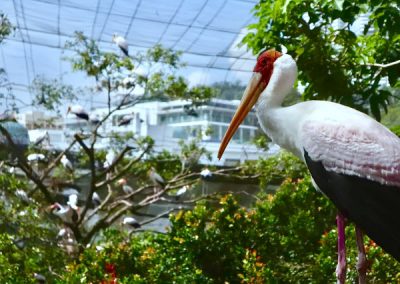 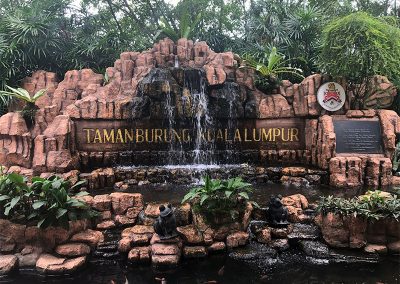 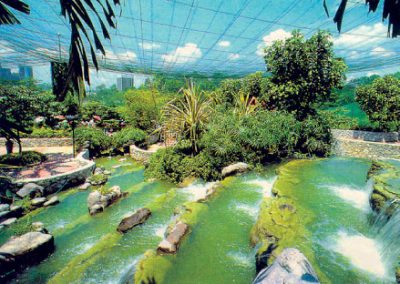 The National Mosque of Malaysia (Malay: Masjid Negara Malaysia, مسجد نݢارا مليسيا) is a mosque in Kuala Lumpur, Malaysia. It has a capacity for 15,000 people and is situated among 13 acres (53,000 m2) of gardens. Its key features are a 73-metre-high (240 ft) minaret and a 16-pointed star concrete main roof. The umbrella, synonymous with the tropics, is featured conspicuously – the main roof is reminiscent of an open umbrella, the minaret’s cap a folded one. The folded plates of the concrete main roof are a creative solution to achieving the larger spans required in the main gathering hall. Reflecting pools and fountains spread throughout the compound. Completed in 1965, the mosque is a bold and modern approach in reinforced concrete, symbolic of the aspirations of a then newly independent nation.

The mosque underwent major renovations in 1987, and the once-pink concrete roof is now clad in green and blue tiles. Today, Masjid Negara continues to stand sleek and stylish against the Kuala Lumpur skyline. An underground passage leads to the National Mosque located near the railway station, along Jalan Sultan Hishamuddin. Its unique modern design embodies a contemporary expression of traditional Islamic art calligraphy and ornamentation. Near the mosque is the Makam Pahlawan (Heroes’ Mausoleum), a burial ground of several Malaysian Muslim leaders. Makam Pahlawan is a 7-pointed star concrete roofed structure.

Non-Muslim visitors are only allowed to visit at certain times of the day and robes are lent to those who aren’t dressed in modest clothing. 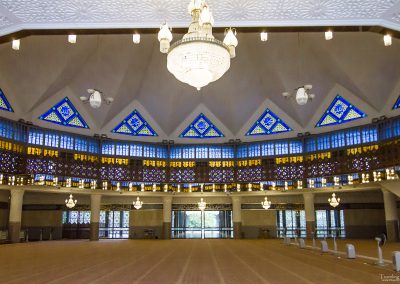 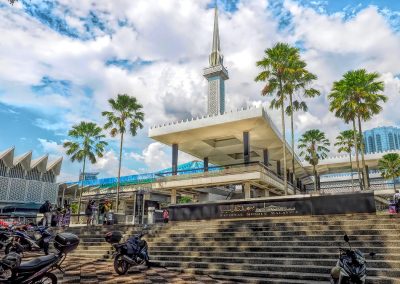 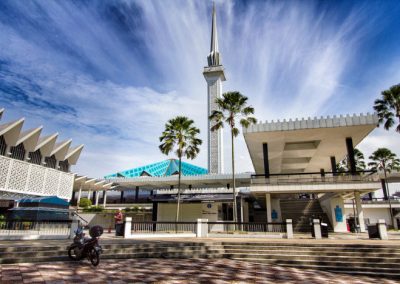 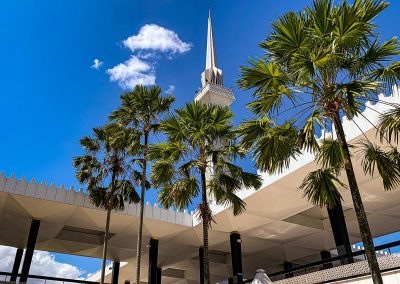 The National Museum (Malay: Muzium Negara) is a museum located on Jalan Damansara in Kuala Lumpur, Malaysia. The museum is situated in close proximity to the Perdana Lake Gardens and it provides an overview of Malaysian history and culture. Its facade comprises elements of traditional Malay and modern features. It was opened on 31 August 1963, and it serves as a repository of Malaysia’s rich cultural and historical heritage.

Muzium Negara is a pioneer in museum activities in Malaysia and a supporter of the conservation and preservation of the heritage of the national treasure collection. Its construction, which represents national identity, is the culmination of the history of the construction of the earliest museums in the country such as the Taiping Museum, Perak (1883), Sarawak Museum (1888) and Selangor Museum (1889). Built on the site of the Selangor Museum which was destroyed in March 1945 due to World War II, the idea for its construction was planned in 1957 after the country’s independence and announced its construction in 1959. enabling its construction to become a reality in 1961. Finally, the National Museum building stood majestically and was inaugurated by His Majesty the Yang di-Pertuan Agong III of Malaysia on 31 August 1963, six years after the country’s independence.
The design of the National Museum building is characterized by elements of aesthetic and traditional Malay palace building carving. This magnificent design was chosen by YTM Tunku Abdul Rahman Putra Al-Haj, the first Prime Minister of Malaysia.

Architectural building National Museum is supported by 26 concrete pillars that have been modified in order to maintain the characteristics of a traditional Malay palace. The concept of 26 pillars is based on a combination of 13 pillars on the east side and 13 more pillars on the west side of the building, which symbolizes Malaysia is formed from 13 states.
The National Museum is a three-storey structure 109.7 metres (359 ft 11 in) long and 15.1 metres (49 ft 6 in) wide, which is 37.6 metres (123 ft 4 in) high at the central point. The museum houses four main galleries allotted to ethnology and natural history. The displays range from free-standing tableaux showing cultural events like weddings, festivals and costumes; to traditional weapons, musical instruments, arts and crafts, ceramics, and flora and fauna. 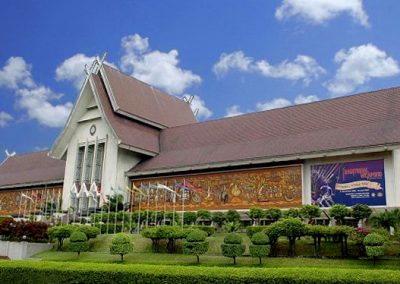 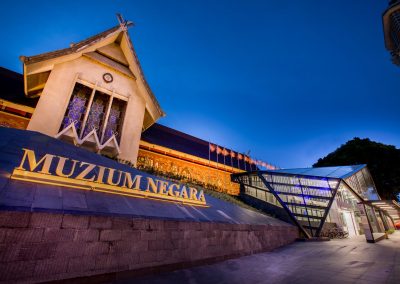 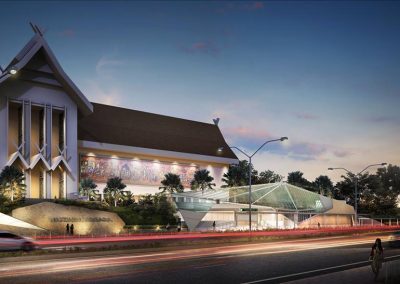 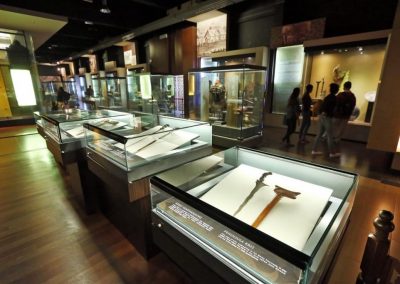 The National Planetarium is an informal educational institution in the field of Astronomy and Space Science located on 14 acres of land in the area of ​​Perdana Botanical Garden, Kuala Lumpur. Its unique architecture is characterized by Islamic architecture inspired by the achievements of Astronomy and Space Science during the glory of Islamic civilization.

The establishment of the National Planetarium is Malaysia’s first step to venture into the field of space science through the development of an informal educational institution in the field of Astronomy and Space science. The uniqueness of the design of the building with Muqarnas motifs in certain corners of the building reflects the excellence of knowledge, ideas, greatness of architects, engineers, designers and project planners.

The building, which was built with great care and precision, was equipped with a Full Dome Immersive System projector for film screening on a 20-meter diameter dome screen, equipped with a 6-channel digital sound system and has the capacity to accommodate 200 people at a time.

One of the major attractions of this planetarium includes a space theatre which screens space shows and large format film. In the main hall are permanent exhibits related to space science. Among them is Arianne IV space engine, which is also one of the engines used to launch MEASAT 1, Malaysia’s first satellite into space. A 14-inch (360 mm) telescope is located in the observatory. The National Planetarium extends to a space theme park where replicas of ancient observatories are sited. It is connected by an overhead pedestrian bridge to the National Museum of Malaysia.

The National Planetarium plays a role in promoting the importance of mastering the field of space science among the community to ensure that the country can develop comprehensively and sustainably (sustainable) in the future. 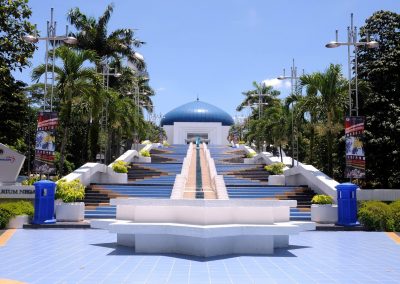 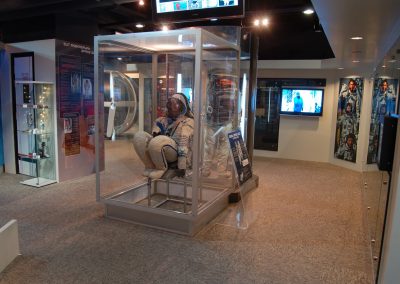 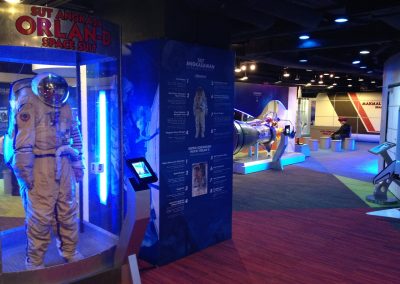 The Perdana Botanical Garden is strategically located in the City of Kuala Lumpur. Formally the Lake Gardens, built in 1888 by A.R.Venning, the state treasurer of Selangor then. In 1975, the late Tun Hj. Abdul Razak, the second Prime Minister of Malaysia officially launched the new image of the Lake Gardens, renaming it the Taman Tasik Perdana, or the Perdana Lake Gardens. Being a public park, the main activities were concentrated on the jogging paths and exercise facilities along the way. On occasions such as this launch in 1975, fishing competitions were held. Concerts were also held at the amphitheatre, the Panggung Anniversary.

On 28th June 2011, the Prime Minister YAB Dato’ Sri Mohd. Najib bin Tun Hj. Abdul Razak launched Perdana Botanical Garden. This marked the completion of the first phase of the process of turning the Public Park into a Botanical Garden.
The first Phase involved the rehabilitation of the main core of the Garden and the addition of various collections and features. The garden is unique in that it has the elements of a show garden, the ambiance of a tropical rainforest, and the serenity of a getaway place despite being in the middle of a metropolis.
The second phase of the transformation will bring in the necessary elements of a Botanical Garden that is the Herbarium, the Library and Visitor Center. Other areas such as the Orchid Garden and the Hibiscus Garden will be enhanced and rehabilitated as well. 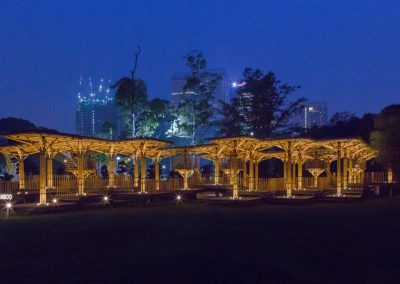 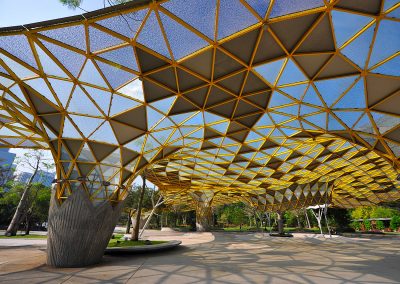 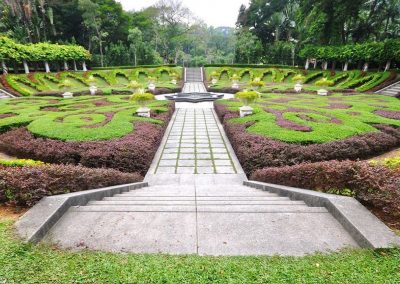 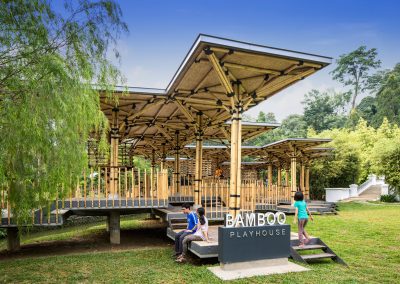 The National Monument is a sculpture that commemorates those who died in Malaysia’s struggle for freedom, principally against the Japanese occupation during World War II and the Malayan Emergency, which lasted from 1948 until 1960. It is located in the Federal capital, Kuala Lumpur. The Malaysian Houses of Parliament is situated near the monument.

It is the world’s tallest bronze freestanding sculpture grouping. Commissioned in 1963 and constructed in 1966, the sculpture that stands as a centrepiece of the monument is 15 meters (49.21 feet) tall, made of bronze and was designed by Austrian sculptor Felix de Weldon, who was also responsible for the Marine Corps War Memorial in Virginia, United States.

The sculpture depicts 7 figures, 5 of the figures [1. holding the Malaysian flag, 2. armed with a rifle and bayonet (left), 3. armed with a machine gun (right), 4. soldiers tending to fifth wounded compatriot] represents the victorious allied forces while the other 2 figures that lie on the ground represents that of the defeated communist forces.

Overall the monument depicts the victory of the forces of democracy, peace and freedom over that of communism. The sculpture was then cast at a foundry in Rome at a cost of RM600,000.

Each of the bronze figures symbolises leadership, suffering, unity, vigilance, strength, courage and sacrifice. The stones that the soldiers are standing on were imported from the small coastal city of Karlshamn in South Eastern Sweden.

The granite base of the sculpture bears the Malayan Coat of Arms, flanked on either side by inscriptions in English, Latin script, and also in Malay in Jawi script. 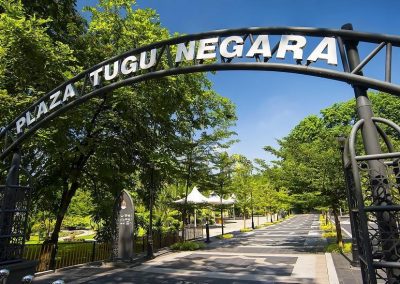 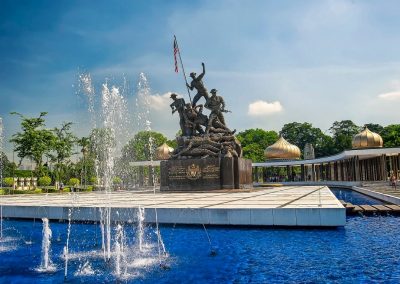 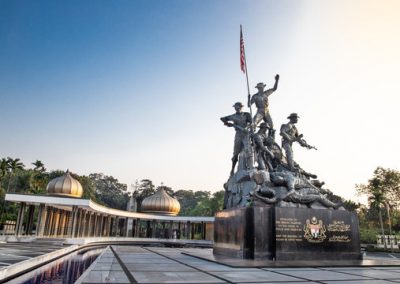 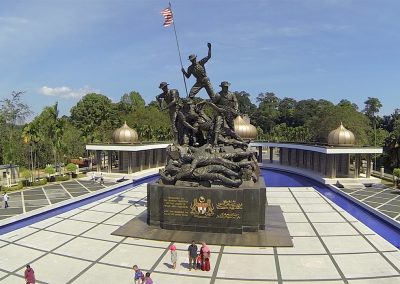